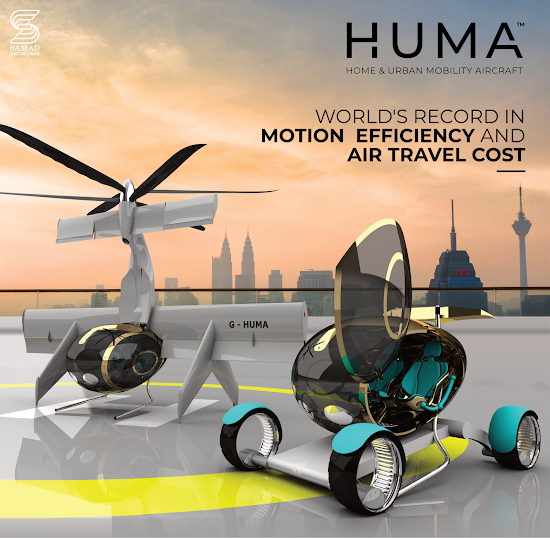 .
Samad Aerospace is a disruptive technology start-up in the UK aerospace industry; committed to accelerate the development of the future ecosystem of aviation through the design and development of electric and hybrid-electric vertical take-off and landing (VTOL) aircraft to improve connectivity and civilian air transportation worldwide.

The world had seen two aviation revolutions since the invention of Wright brothers. The conversion of wooden biplanes to fast metal monoplanes followed by the integration of jet engines have enabled massive progression in world aerospace industry. Today, aircraft electrification, VTOL (therefore, no need of busy airports), autonomy and exploitation of artificial intelligence (AI) are critical enabling technologies to unlock the upcoming wave of 3rd aviation revolution. Globally, world-leading aircraft manufacturers are working towards realizing this future, with significant investments are made today in the US and China to accelerate development and production of innovative more-electric next-generation aircraft.

Samad Aerospace is pioneering the design, development and build of the world’s fastest vertical take-off and landing (VTOL) electric and hybrid-electric aircraft at 1500 miles range and up to 460 miles per hour speed that significantly reduces travel time (~50%) for air ambulance applications, intercity air transporters and international air travels, via the E-Starling.

Today at LIMA’19, the CEO of Samad Aerospace, Seyed Mohseni said, “In addition to this, Samad Aerospace has been watching the development of urban air mobility closely. We believe that the technology we’re developing will be applicable in many ways to the market as it evolves from today’s best practices.”

“Our advances in technology such as autonomy and usage monitoring will be key, and we look forward to continuing to add our perspective to emerging markets including urban air mobility.”

Seyed launches HUMATM (Home & Urban Mobility Aircraft), a two-seater 2-in-1 combo of all-electric VTOL aircraft and car. The design of the aircraft addresses all of the key criteria tailored to the urban mobility market: minimum acquisition and operating costs, as well as improved efficiency and ease in air travel.
.

.
​​​​​​​Norman David Richard Wijker joins on board the aerospace tech start-up as Head of Engineering Research & Development to lead and spur the R&D growth as the Starling Fleet starts to fly. With former 30 years of experience including with Airbus and Boeing, Norman is geared with solid grounding in aerospace structures and backed up by experience in future projects, landing gear design and aircraft integration.

Dr. Seyed Mohseni, SAMAD Aerospace CEO said: “I am thrilled that Norman is joining our exciting team as he shares our vision in revolutionising the way humans and goods fly around the world. Norman’s vast experience in Airbus and Boeing will be invaluable as we aim to have our first flight in place in 2019. In his position as the Head of Engineering R&D at SAMAD, Norman will play a vital role in the R&D department, to ensure the company is fully optimised and the Starling aircraft would be ready for commercialisation.”

Norman Wijker said: "I am very excited to be joining Samad Aerospace. The kind of radical innovation that the Starling Jet represents is exactly why I started a career in aerospace. This is certain to be an adventure!"
.

.
​​​​​​​The IDTechEx Show is a premier business exhibition with over 200 exhibitors engaging with over 2,500 attendees, presenting the latest emerging technologies under the same roof.

Samad Aerospace CEO, Dr. Seyed Mohseni will be presenting as an invited speaker for the "Emerging Market for Electric Vehicles" session. The talk will evolve around the latest Starling Fleet project which consists of the following: an unmanned version of the Starling design but at 20% scale of the passenger models (UAV Starling), an all-electric VTOL aircraft which will have a maximum payload of 6 people (1 pilot plus 5 passengers) and a range of 300-400 miles depending on payload (e-Starling), and a long range passenger VTOL aircraft with hybrid-electric jet propulsion (Starling Jet). It will have the same design as e-Starling but incorporates both diesel and electric jet motors instead.
.

.
CleanEquity® is an annual invitation-only event hosted by Innovator Capital, the London-based specialist investment bank. The conference that takes place at Fairmont Monte Carlo, Monaco provides an intimate and collegiate setting for inventors and entrepreneurs to share their stories with delegates – key decision makers looking to assist them with reaching their commercial and strategic goals.

Samad Aerospace has been identified by an expert panel as one of the world’s most innovative sustainable technology companies and has been selected to present to selected sovereign, corporate, family and professional investors and acquires, policy makers, end users and international trade media. 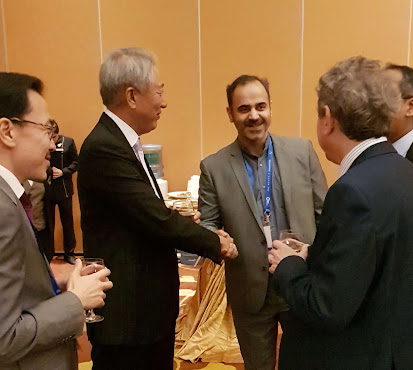 .
The future is upwards and green.

The CEO and Founder of Samad Aerospace, Dr. Seyed Mohseni, has had a brief meeting with the Deputy Prime Minister of Singapore, Mr. Teo Chee Hean during the Welcome Ceremony of the Singapore Airshow 2018 at Marina Bay Sands on the evening of 5th February 2018.

The Chief Technology Officer of Rolls Royce, Paul Stein was also present and has expressed that: "The future of aircraft is indeed going towards electrification and aircraft with VTOL capability".

Samad Aerospace will be showcasing its one-of-a-kind vertical take-off and landing (VTOL) business jet at the biggest airshow in Asia on 6th February 2018. The Starling Jet will be the world's first hybrid-electric VTOL business jet that is designed for performance, speed, comfort and green with the added flexibility to take-off and land from just anywhere.

Mr. Teo who was also the keynote speaker of the Welcome Reception, has expressed his interest in getting Singapore's participation in Starling Jet project and be part of the technology development and supply chain of this unique aircraft. Talks will continue with EDB of Singapore to join the UK company in this exciting journey.

The first official release of the Starling Jet concept is planned to be held at the Singapore Airshow on Tuesday 6th February 2018, at 12 pm (GMT +8) at the UK Pavilion Lounge. Media members are welcomed to find out about this unique feature of the electric business jet.
.

.
Samad Aerospace is developing an electric VTOL business jet that has the range of 1500 miles and can carry 5 people (and a further 80 kg of baggage) with one person being the pilot. The Starling Jet has the speed of 450 miles per hour and is going to be developed with fly-by -wire and full autonomous capability. Less than 20 hours of training would be enough to fly the Starling Jet. The aircraft is capable to take-off and land from an area as small as a helipad.

The Starling Jet is designed to have the high power-to-weight ratio electric fans similar to that of gas turbine engines. In addition, it features the power electronics and battery technology that can operate at a very low temperature and extreme environment of 30,000 ft altitude. The company is taking advantage of current developments in battery and power electronics and low cost gas turbine engine for charging the batteries at cruise.
.